To Stay Up to Date on the OPPT

This post is to direct you to the "OPPT links" tab, where you can find many sites that do a fantastic job of giving you the latest on the OPPT.  I will not continue to unnecessarily reblog what you can find in these sites.

The purpose of this blog is for people in the Ottawa, Canada area to find each other.

pipercrane@gmail.com
Posted by People's Trust Ottawa at 6:54 PM No comments:

The members of a group calling themselves The One People’s Public Trust (OPPT) have been in the news lately, because of  recent UCC filings, with regards to the Uniform Commercial Code (UCC).
The UCC is not a U.S. law, rather a uniform code of conduct for Intra-State and Global commerce, drafted and approved by private organizations, to be enacted by the individual U.S. States, and World Governments.
It has been approved by all 50 States in the U.S., Washington, D.C., The Commonwealth of Puerto Rico and The U.S. Virgin Islands, as well as all major World Governments.
What follows is a Press Release of a letter sent to the Prime Minister of Sweden, Fredrik Reinfeldt.
>>>Press Release – For Immediate Distribution<<<
Prime Minister Fredrik Reinfeldt,
Regeringskansliet
103 33 Stockholm
February 20, 2013
Open Letter to the Prime Minister and the Ministers of THE GOVERNMENT OF SWEDEN
Dear Prime Minister Fredrik Reinfeldt,
I am writing this letter to you to inquire about a very pressing issue, an issue that touches every human being on this planet, at this very moment.
I stand in my honor before you. My request to you has no other motive but my human desire to uncover the truth, and bring remedy and hope to the rest of my broken hearted brothers and sisters.
It has recently come to my attention, that we, the people of this beautiful country, had a corporate government. This implies that we actually did not have a government serving the needs of its people but a corporation, acting as a government.
*SEC lists SWEDEN KINGDOM OF as a corporation.
The difference between the real, active and lawful government and the corporate government that was operating in its place is enormous. We the people, had, by an act of deception, become commercial commodities; our lives had a monetary value to the corporation and we were considered cargo or chattel. Our personal possessions could be seized from us, our children taken from us, our lives lost and our dreams stolen by it.
We belonged to the CORPORATION. We were its slaves.
This is very important information for all of us; information that we the people of this planet are waking up to.

The New Nomads, a New Series from Travel and Escape

I absolutely LOVE this series of videos!  This is an original web series by Travel + Escape called The New Nomads.  Each video features an individual or couple who left corporate life to chart a worldwide path of Adventure.  When you watch these people, it's difficult not to be nourished by their energy and enthusiasm.  They are free.  They are FREE.

This series may not have a direct connection with OPPT, but indirectly it does.  It shows a bunch of people who won't allow society to dictate to them what they can or cannot do.  Sprinkled in there are a number of gems -- fearlessness and self-empowerment.  In episode 8, Christine Maxfield talks about how money loses meaning with her as she naturally started to exchange value with no money involved.

Travelling like what these people are doing is definitely not for everybody, but I enjoyed this series for the wonderful sheer audacity of them looking straight at society and saying, "I can and I will walk a different path.  This path (corporate life) does not serve me."

Please note that this series is sponsored by Scotiabank, one of the five big banks here in Canada.  I know, but after the grimace, please try to overlook it and enjoy the content.

The entire series can also be found at their website:
www.TravelandEscape.ca/NewNomads

Posted by People's Trust Ottawa at 8:33 AM No comments: 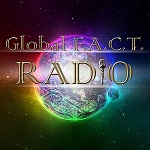 Global Fact Radio interviews Heather Ann Tucci-Jarraf in this episode of Conscious Living.  This is the first time that Global Fact Radio has interviewed Heather about the OPPT and they received the most live listener in their show's history.  In fact, they've maxed out the room and has to open another room to accommodate 1000 more guests.

Along with Heather, retired Captain Deryl Zeleny of the Canadian Armed forces, was also featured.  Deryl relayed his experience about discovering the truth to Corporate Canada by following the money in one of his assignments.

After an introduction from Heather, most of the show was formatted around questions called in from listeners.  There appeared to be a lot of questions on the practical level such as enforcement, the ability to reclaim the world's assets.  Another trust was brought up.  Others centered around who the players are.  One listener asked who are the people behind the curtain.  Another listener was confused about the role of Saint Germain.  Listen to find out Heather's answers.

Posted by People's Trust Ottawa at 7:42 AM No comments:

The Collective Imagination show on Feb 19/20 2013 was quite an emotional one for the regulars on the show.  Some were speechless as they were overwhelmed by the sheer magnitude and the magnanimity of the latest filing.

Heather Ann Tucci-Jarrah explains the filing, touching on the definition of terms such as who is a Bondservant.

Posted by People's Trust Ottawa at 11:28 AM No comments:

Mel Ve, from freedomcentral.info conducted this interview of Heather Ann Tucci-Jarraf from the One People's Public Trust (OPPT).  At one point, Mel Ve asked Heather to not hold back and essentially start from the beginning of how all "this" came about.  Well, Heather did not hold back as you will hear.
Published on 17 Feb 2013

Posted by People's Trust Ottawa at 10:42 AM No comments:

http://americankabuki.blogspot.ca/2013/02/oppt-ucc-financing-statement-amendment.html
Posted by People's Trust Ottawa at 10:13 AM No comments: